A brilliant composer and coder goes undercover to trap a cybercrime syndicate that has hijacked her website—to traffic blood ivory. She must survive impossible physical, virtual and cultural obstacles and choose between the opposing forces of privacy and responsibility.

Allison is stunned when the CIA leaves her no option but to go undercover to surreptitiously modify the code she wrote to protect her symphony. She is deployed from New York with a savvy street vendor to Tanzania, where he is from—and where the cybercrime trail goes dead. Their guarded love affair is sidelined when they are abducted by a trafficker who poaches elephants on a massive scale. To avoid betraying each other they abandon their CIA handlers and return to New York City. Allison must find a way to bring down the syndicate knowing that she might have to sacrifice her symphony, her loved ones and her privacy—for a greater good. 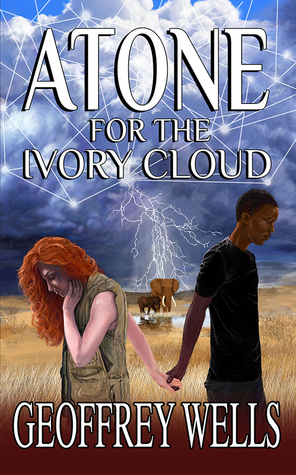 I received a copy of this book from the author in exchange for an honest review.

When I was asked to review this book, I could hardly say no. As a blogger that likes to tie music and books together, a book about a composer was just far too tempting. And I definitely wasn’t disappointed. While the music wasn’t the biggest focus in this book by far, it was always there, just hovering beneath the surface, always playing a role even if they weren’t talking about it at that exact moment.

This book is follows Allison, who recently had her identity stolen and now hides her music in code on the internet to share it with collaborators. When she collides with a runner and her phone goes missing, she finds herself pulled into a world of hackers, illegal trade, and elephants. But more and more, it begins to look like her safety isn’t the top priority and there is more going on than she could have ever imagined.

The Good Points of Atone For The Ivory Cloud:

This book is loaded with insane plot twists. Every time you think you’ve got this whole thing figured out, something else gets tossed in and messes up everything for Allison. And then you finally get to the end of the book, and you think to yourself ‘it’s almost over, nothing else can surprise me now’. But it does. And it’s great.

There’s a lot of programming and computer-y talk throughout this book, as you would expect from a book about hacking and illegal trade. But despite the fact that I know very little about programming or hacking or anything like that, I never found that I was lost or confused about what was going on. Wells does a great job of making it easy for the reader to understand what’s going on.

The pacing in this book is amazing. It isn’t so fast that you’re feeling lost, but not so slow that you get bored and set the book down.

This point pairs with my negative comment about the characters, which you probably haven’t read yet. But I didn’t like most of the characters in this book. However, this didn’t affect the book at all, and didn’t turn me off the story as it usually would. That takes some serious story telling skill.

The Downsides of Atone For The Ivory Cloud:

I hated every character in this book except for Sipho, and he was just okay. Allison is a nasty, arrogant, entitled prick throughout the entire story, no matter how often she’s saved, gets lucky, or survives to live another day. Her mother is as bad as she is, and Rex is a cocky jerk. None of the minor characters are better. And sure, some people are like that, but none of them seemed to have any redeeming qualities that made me care about them in any way.

The romance in this book was weird. It seemed out of place and random. It didn’t add anything to the story, and just seemed to take away from the seriousness of the rest of the book.

All in all, I enjoyed reading this book. It was one hell of an adventure, and the pacing was great throughout the story. I wish the characters would have had something going for them that made me want them to survive their situations, but them sucking didn’t really take away from the story. Definitely one worth checking out if you like adventure stories, hacking chaos, or elephants.

One thought on “Atone For The Ivory Cloud by Geoffrey Wells”